Since the operation of the first coal fired power plant in Hadera in 1982, coal ash began to be produced as a residue of coal combustion and as a byproduct of the production of electricity. The coal that is imported to Israel contains between 4% – 15% ash by weight, depending on the source of the coal, and averages about 10% – 12% depending on the overall composition of the variety of coals purchased.

The main use of coal in Israel is for generation of electricity, both currently and apparently also in the future. Therefore, the centers of its production are the existing coal-fired power plants – “Orot Rabin” in Hadera, and “Rutenberg” in Ashkelon, and the plants that are planned to be built at these sites. The Coal Ash Administration that was established in 1993 with the objective of coordinating the effort at a national level to solve the problem of ash accumulation at the power plants, chose to deal with the problem by advancing the use of coal ash as a resource having economic value, in various sectors, as is done in most of the developed countries in the world.

This site is intended to provide information regarding coal ash characteristics, beneficial uses of coal ash, both currently and in the future, in construction, infrastructures, industry and agriculture in Israel, to provide information on environmental quality issues, and to describe what is being done in this area to prevent damage to the environment and to improve it.

Attached is an article submitted to AshTech2006 Conference in Birmingham. The article presents the coal ash utilization development process in Israel and focuses on uses in the construction sector and on the Israeli fly ash quality in that context. The article refers also to unique Israeli bottom ash uses in agriculture.

Coal ash is the mineral residue that is obtained as a byproduct of the combustion of coal for the production of electricity. Two types of coal ash are obtained:

Along with coal ash gypsum (FGD – Flue Gas Desulfurization) is obtained as a result of removal of sulfur from exhaust gases, it is also one of the group of Coal Combustion Products, CCP’s, or Coal Combustion Byproducts, CCB’s. In Israel, coal ash is produced at the “Orot Rabin” Power Station in Hadera and at the “Rutenberg” Power Station in Ashkelon. FGD is now produced only at Rotenberg. The coal is imported to Israel from various sources: mainly from South Africa, Colombia, Australia and Indonesia. Certain quantities are also imported occasionally from the United States, Poland, and China. On average, the coal that is combusted in Israel contains 10% coal ash.

Fly ash particles are swept along with the exhaust gases and are collected in electrostatic precipitators before they reach the stack. The ash is stored in silos in a dry state. From the silos, it is transferred in trucks to be used in industry as a pozzolanic additive in cement and concrete batch plants, or as a filler in various products. When the silos are full, it is conditioned by moistening (to 22% moisture) and sent for intermediate storage in open piles at the power stations or outside of them until it is utilized as a filler material in roads and infrastructure works. Transport of the moistened ash is done in semi-trailer trucks that are covered with canvas to prevent creation of dust. The bottom ash falls into a water pool at the bottom of the boiler and is removed by a conveyor belt to storage facilities and from there to intermediate storage piles while in a water-saturated state. In the piles, the water content decreases to about 20%.

The ash is mainly composed of silica, alumina, and smaller quantities of oxides of iron, magnesium, calcium and other elements. It practically contains almost all the known elements, including toxic elements in trace quantities, which, to the extent of the concentration of their availability, may sometimes demands preventive environmental care. Furthermore, the ash contains radioactive elements in small quantities, but their concentration in ash is relatively larger than their concentrations in most natural rocks and soil. The ash also contains unburned carbon residue that gives it its dark color. The carbon content, as measured by a loss on ignition test, LOI, is commonly found in Israeli coal ash to be in the range of 3% – 6%.

The ash is characterized by physical (lightweight, small spherical particles, hardness) and chemical (cement-like) properties that provide it with an economic value as a raw material in many applications. 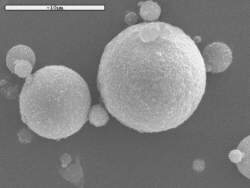 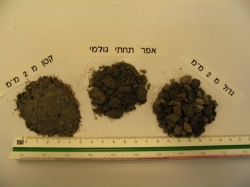 From the standpoint of the electricity generation system, ash is a waste product (residue) that must be disposed of at the lowest possible cost, this without harming the environment. By contrast, from a national economic standpoint, ash is a by-product which has an economic value. Coal ash is a substitute for dwindling natural raw materials (sand, aggregates, tuff, etc.) that are now in short supply, and whose quarrying harms the environment.

The return to coal as an important energy source for electricity production at the start of the 1970’s, on one hand, and the increasing awareness of environmental protection on the other hand, led to development and implantation efforts for a variety of ash uses around the world.

The uses in the construction and infrastructure sectors are the most common and they exploit the coal ash as is. The other uses require processing of the ash, mainly classification according to size and purity by physical and/or chemical separation. Their potential use is relatively small, however the price of processing is compensated for by the prices obtained, form a few dollars up to hundreds of dollars per ton or even per kilogram, relative to competing materials.

The level of ash utilization and the entire scope of uses in various countries are dependent on the local characteristics of each country – economic, geological, geographic, environmental, etc.